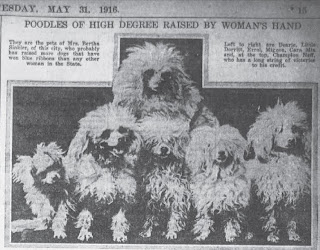 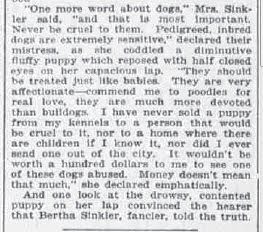 "They should be treated just like babies. They are very affectionate - commend me to poodles for real love, they are much more devoted than bulldogs."
Posted by Rag Doll at 8:41 AM 3 comments:

First documented instance of the words "nanny" and "bulldog" in the same sentence. 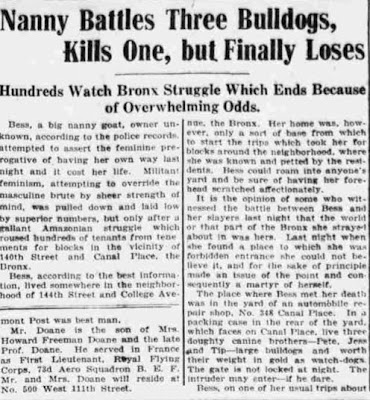 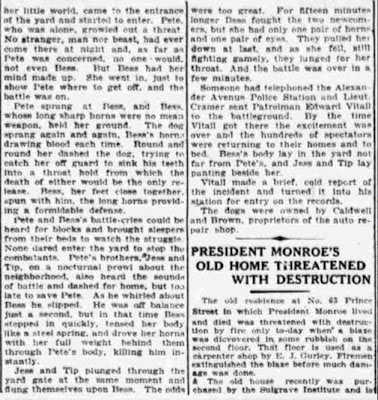 The Evening World
Posted by scurrilous amateur blogger at 9:34 AM 4 comments: 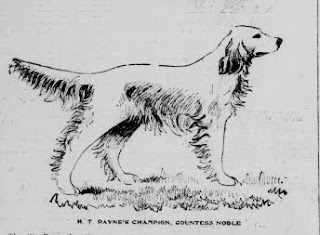 Email ThisBlogThis!Share to TwitterShare to FacebookShare to Pinterest
Labels: 1895, setter

In the words of Vintage:
DISCLAIMER: I am not making this up!
On August 7, 2008, news outlets announced that Bernann McKinney sold her house to pay a South Korean laboratory $50,000 to have her beloved pit bull, Booger, cloned. The laboratory used a 2 year old frozen piece of Booger's ear to produce five little Boogers named: Booger McKinney, Booger Lee, Booger Ra, Booger Hong, and Booger Park.

McKinney was bereft when her beloved Booger passed away with cancer in 2006. She considered Booger to be a hero for saving her life by attacking another one of her dogs, a mastiff, that was mauling her. She contends that the mastiff attacked her because he went crazy after being given ten times the recommended dose of medicine he was taking to remedy a bee sting. The mastiff purportedly shredded her left arm to the elbow, tore open a leg, and nearly removed fingers from her right hand. In some accounts, she says that she had her arm amputated by the dog and reconstructed by doctors. 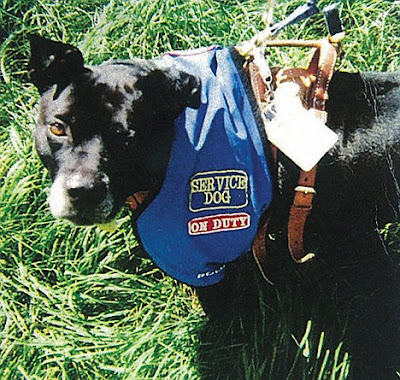 While confined to what is shown in a photo to be a motorized scooter, McKinney claims that though completely untrained, Booger became her service dog, pulling her scooter when the batteries were dead and pulling off her socks and shoes. “I was in a wheelchair, and my arms were in braces for a long time — I couldn’t use my hands. He could unlock a door with his teeth, he could answer the phone, he could do the laundry. He was my hands." He could even dial 911. [see above link] 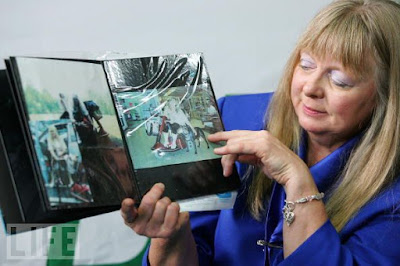 McKinney determined she would keep three of the puppies and donate two to be trained as service dogs. She eventually wants to create a service dog training facility that she will name "Booger's Place." 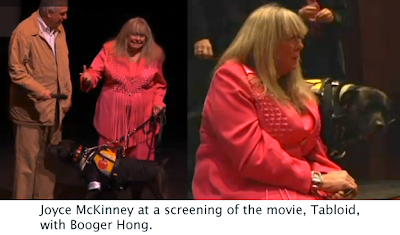 [DISCLAIMER: I am still not making this up!]
While still in Seoul, reporters called Bernann McKinney to ask if she was the Joyce McKinney who had abducted, chained up and raped a Mormon missionary in England in the summer of 1977. After initially denying it, she later admitted that she was indeed the Joyce McKinney who had been involved in what became known as the "manacled mormon case" in the tabloids during in the 1970s. 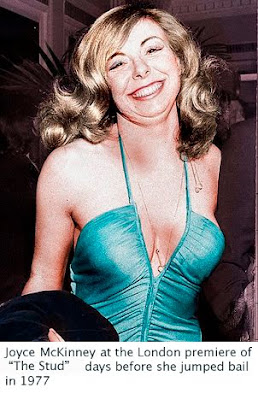 Twenty five year old Joyce McKinney met 19 year old Kirk Anderson in Provo, Utah in 1975. They had sex and Anderson, a mormon, felt remorseful and guilty about it. He ended the relationship and confessed to his bishop who arranged for Anderson to go to England to do missionary work. He left without telling McKinney where he was going. But a determined and unrelenting McKinney hired a private detective and followed him to England two years later. She recruited another man, obtained a bottle of chloroform, a toy gun, mink lined handcuffs, and a romantic 17th century stone cottage and then she kidnapped Anderson. She shackled and chained him to a bed and forced him to have sex against his will. Anderson claims that though he was not physically restrained during the two subsequent sex acts, he had sex unwillingly and feared being chained up again if he refused. After three days, Anderson escaped and McKinney and her accomplice, Keith May, were arrested. Both McKinney and May were held pending the trial for 3 months. 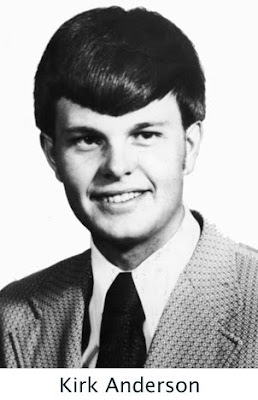 In her pretrial statements, McKinney contended that she was trying to rescue Anderson from the clutches of the Mormon church. She believed him to be sexually repressed and unable to enjoy sex because of an oppressive mother. She consulted The Joy of Sex and several men and learned that "bondage sex" in which the woman is the aggressor can be therapeutic for men such as Anderson. McKinney contended that the sex was a therapeutic bondage sex game that was consensual. One wonders about the chloroform in that case... 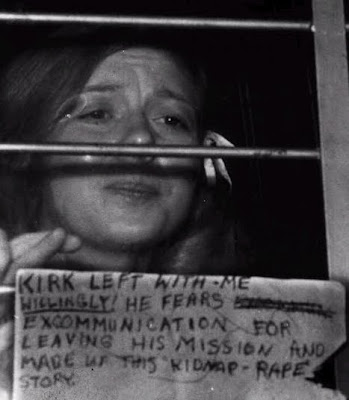 It was judged that McKinney's mental health was deteriorating in jail, so both McKinney and May were released on bond. Shortly later, they skipped bail by obtaining fake passports and posing as deaf/mutes in a mime troupe.

When McKinney got to the United States, she disguised herself as a nun for a while. After learning that England had convicted her in abstentia but did not wish to extradite her, she ditched the nun habit went a completely different direction. 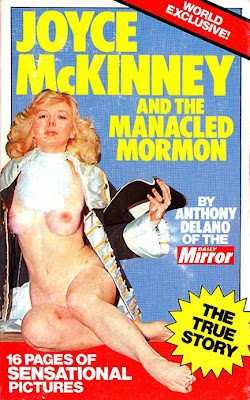 In 1979, the FBI arrested her for the false passports and gave her a suspended sentence. 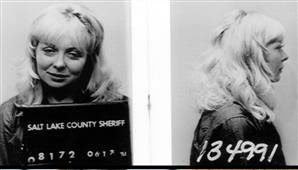 In 1984, she was arrested for allegedly harassing or stalking Anderson again. She allegedly was found outside his workplace with rope and handcuffs in her trunk.
"In 1993, McKinney donned a wig and applied for a job at the Washington County Animal Shelter in an effort to gain access to pit bulls dogs slated to be euthanized for attacking a couple, the Johnson City Press Chronicle reported on its Web site..."
When her neighbors in Newland, North Carolina, where she lived until 2006, read about Bernann/Joyce and her cloned dogs, they offered up still more stories.
She allegedly was banned from two local veterinary clinics.
She allegedly initiated myriad lawsuits against people in her home town. Those people included her parents whom she evidently blame for allowing her mastiff to be stung by a bee. She has also initiated lawsuits against police officers and a magistrate. She has also been hit with some lawsuits, some by 3 previous lawyers she allegedly had not paid.
"Stuart Elgrod, the lawyer who defended her in 1977, now shuns her ('Not her again! She always was a nutter,' Mrs Elgrod told The Times. 'Every so often she finds us and drives us mad."
The Avery County Sheriff stated that there are several charges on file against McKinney for passing bad checks, assault on public officials and 2004 animal cruelty charge alleging she failed to take proper care of a horse. That charge was dropped.
There were also outstanding warrants for her. One sought her arrest for communicating a threat against another woman. There was also an oustanding warrant from Carter County, TN where she was arrested and charged with aggravated burglary, contributing to the delinquency of a minor, and speeding. She allegedly enlisted a 15 year old boy to burgle a house in order to obtain money to buy a prosthesis for her three-legged horse. 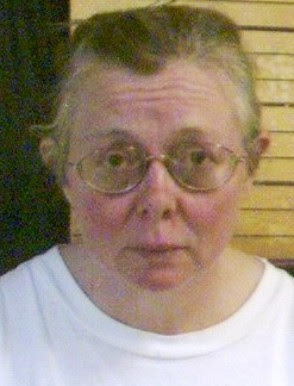 Email ThisBlogThis!Share to TwitterShare to FacebookShare to Pinterest
Labels: cloning, Joyce Bernann McKinney, psycho, rapist
Newer Posts Older Posts Home
Subscribe to: Posts (Atom)
The Bulldog, devoted solely to the most barbarous and infamous purposes, the real blackguard of his species, has no claim upon utility, humanity, or common sense, and the total extinction of the breed is a desirable consummation.—
"BRITISH FIELD SPORTS," 1818.