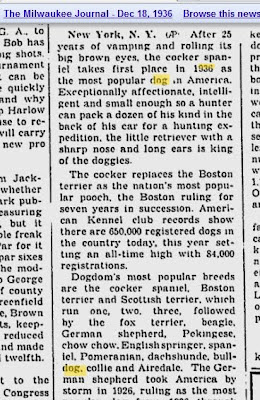 i was considering a blog post about canine identity theft. this is a fantastic find rag doll! this confirms a theory i have. a few months ago as i was pouring through dog magazines from the early 1900's, i began to form a theory. i think the pit nutters hijacked the popularity of the boston terrier. by including helen keller's boston terrier sir thomas and boston terrier sgt stubby in their list of famous "pit bulls", they also claim the rights to the boston terrier's popularity.
please let me know if you come across any more articles like this.

Look up pit nutter on urban dictionary. They try and lie about everything.

How big of an industry is dogfighting? Big enough to be sponsored by Heineken!

No wonder the pit breeders fight to hold on to their revenue stream!

that's a serious black eye ya got there heineken.

Dogs are certainly having their day in the army. And we're not referring to those animals which have been signed up in dogs for Defense Corps throughout the country.

The great American mascot who "just goes along for the ride" has a lot of fun. Here are two stories to prove the point.

Phenomenal? Well, a full life, at least, for one little Scotty named Skipper, the canine mascot of Sgt. Joseph Angelini, of Philadelphia, picked up in Albuquerque, H.M, when the pup was six days old.

Angelini and Skipper were aboard the first B-17 bomber to flu over Guadalcanal. Skipper whined a bit on the first trips, but he quit that when he got used to the noise of the guns, Angelini says.

Owner of Cid and Zab will seek to prove gentleness of breed.

The persons who have imagined that the chief end of the pit bulldog is to wage unrelenting warfare upon all other dogs, and to increase the canine invalid population as rapidly as possible, will have an opportunity to find out that the pit dog is a perfect gentleman if man kin will only let him alone and not put naught ideas into his head.

For this information the public will be largely indebted to the Cevarbrook Kennel and Poultry Farm of Amityville. L.I Col. E.A Rogers and M.C.W Buchenberger of that institution will exhibit Cid and Zab , two fine specimens of the pit type, at the Madison Square Kennel Show, not only with a view to showing the gentle side of the breed, but for the purpose of starting the Pit family in the dog show class.

The champions of the Pit urge that the dog is not a fighter unless he is bought up that way and that he is an ideal watch and guard dog in addition to being cartable and especially suited for the pet realm. The two dogs which will be shown have ben broken to harness, and a little girl drives them to a diminutive wagon. Many Brooklynites, who have seen the child driving the perfectly trained animals, have wondered at the obedient, gentle conduct of the team.

Doesn't the anon comment above post mean that pit bulls were thought of as generally vicious since this man is trying to convince a wide audience that they're not? That means the general opinion was a negative one.

Scratch the 1910 years off of the list of possible popular eras for pit bulls.

I person calling themselves "Precious Klan" made the following comment upon my blog:

"What an evil-hearted person you are.All dogs should be loved and do not deserve your pre-judgement.Unlike yourself,dogs are inheritently happy,courteous,and love all of God's beings.If you do not have anything pleasant to say...Keep your nasty trap shut :) I'm glad that my daughter's beautiful dog will never encounter you."

Allow me to direct you to the person's screenname again for irony's sake.

What is a bulldog?
It is a monster that transforms itself into a machine. It is a battering ram. It is the entrance of matter into Liberty. It is a mad mass with the bounds of a tiger, the stelthiness of a mouse, the obstinance of an ox, the unexpectedness of the surf, the rapidity of lightening, the deafness of the tomb. It weighs forty or fifty pounds, yet it rebounds like a child's ball. Its attack is a wild whirl abruptly cut at right angles.
The tempest ceases, the cyclone passes, the wind falls, the broken mast is replaced, the leak is stopped, the fire dies out, but the bulldog never lets go.
He has more tenacity than a Stockton bill collector.
He is Old Tenacity itself.

Chapter II
You can make a mastiff hear reason, astound the bull, fascinate the boar, frighten the tiger, soften the lion, but there is no way to Christianizing the bulldog.
You cannot kill him. He is dead, and at the same time he lives. He lives with a sinister life bestowed upon him by Infinity.


there is more in the link.

I'm surprised to see the mention of the Chow Chow at no. 10 in popularity. I knew they were popular in the 20's but not THAT popular. They are usually listed by pit bull fanciers as the MOST aggressive breed (included with Chihuahuas and Daschunds), and I'm not going to dismiss the fact that they are a breed of dog that is worthy of vigilance and even policy that should be required of pit bulls. It also seems that every single pit bull advocate has had a bloody incident with Chow Chows. Well, Sigmund Freud had one, and said that they were good judges of mental states....

The Chow Advocacy insists that they are not a breed for families with children, quite different from the pit bull advocacy, who calls pit bulls "nanny dogs".

So, have you run across any vintage "Nanny Chow Chows" or vintage Chow Chow maulings? Just curious.

Chow mixes are currently more populous than pit bulls, the no. 3 most popular mutt. I used to have two of them, until one was murdered by a neighbors sweet gripper.

when your truth blog update.

i keep missing my self imposed deadlines on my next truth blog posts, not by choice.

have you looked at pete the pup clips? some of them have people clearly fearful of the dog.

this video has a man and boy hanging from a light on the ceiling as they plead pete to leave their store.