"It is likely that the fear that many people have for pit bull terriers, bats, snakes and other definably ugly animals has its roots in our cultural connection of appearance and deviance." 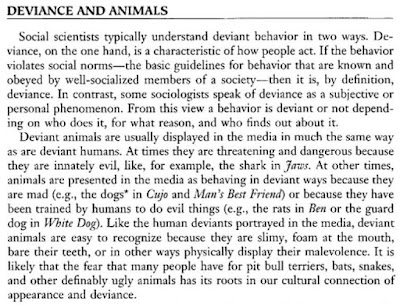 Ah, so Beckoff has gone off science to go politically correct. Pity. He did a lot of good back in the day when it was taboo among the 'sci' crowd to defy Descartes's definition of non-human animals as machines (for which Skinner later explained the programming language). Of course, he only dared do that after Jane Goodall had bitten off the first chunk by naming her chimps instead of giving them numbers. It's too bad Beckoff doesn't dare to stand up to the pit freak crowd and admit that genetic selection for unpredictable, explosive, abnormal aggression really did work on the pit bull types, despite the fact that yet another woman (Semyonova) bit the first chunk off for him.

Maybe Beckoff thinks denying Darwin will look as courageous as his denial of Descartes was back in the day -- but with less risk, since none of the pit-whoring 'sci' crowd seems familiar with or a fan of Darwin.

Beckoff is so selective in his definition of 'deviance' here that he should be outed for lying by omission. With the exception of the pit bull types, it's statistically and ethologically not the norm for dogs to maul and kill. Most dog breeds/types have zero likelihood of mauling or killing anyone (or even anything) during their entire life span.

If OTOH you limit your statistical definition of 'normal' to only pit bull types, then mauling and killing are statistically and ethologically normal -- 96% of them try to kill something in their first five years of life; the ecological niche for which the pit bull type was developed was the fight/bait pit, in which trying to kill anything still breathing is the ecological and ethological norm. If that's what Beckoff is doing here, then he should have said so. That he tries to apply this norm to the domestic dog in general is, IMO, outright whoring...unless he wants me to blame it on beginning Alzheimer's.

I have a feeling he will also have offended pit bull fans here by calling their darlings ugly -- though yet again, he doesn't define what he means by that. People might find a snarling, tooth-baring dog ugly, but since the pit bull type does its mauling with a smile on its face and a wagging tail, it's unlikely that ugliness has anything to do with why all rational, sane, non-whoring people fear and dislike the pit bull type dog.

It's kind of sad to see Beckoff deteriorating this way, but it's definitely an indication it's time for him to retire and stop playing the expert on things animal.