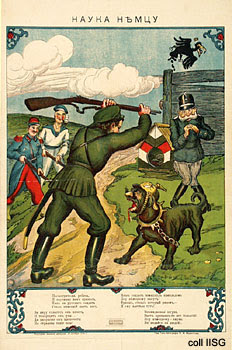 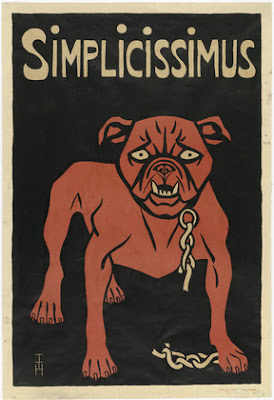 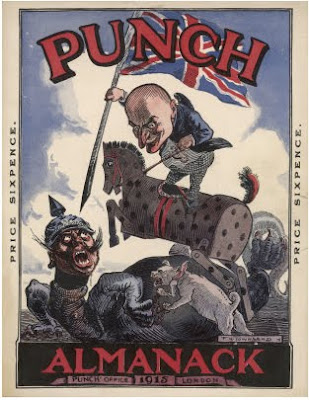 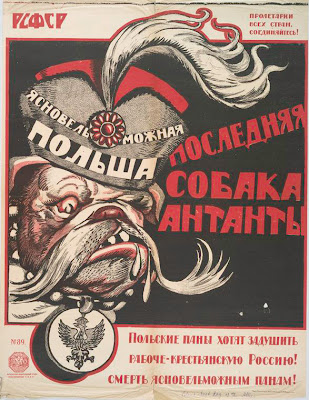 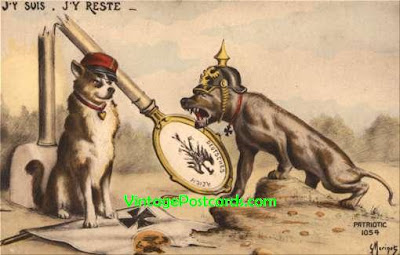 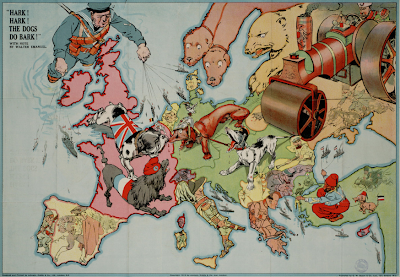 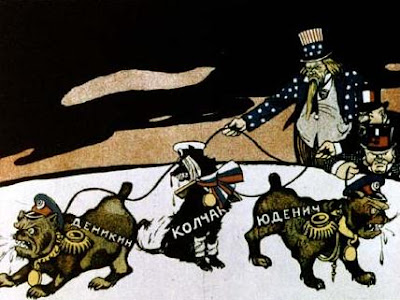 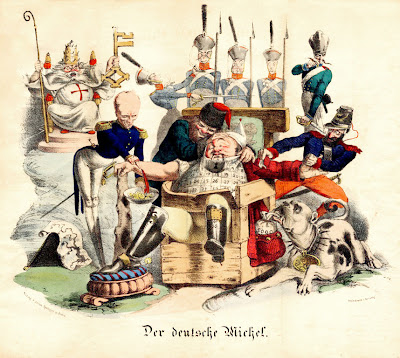 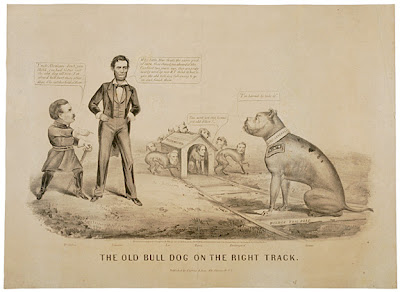 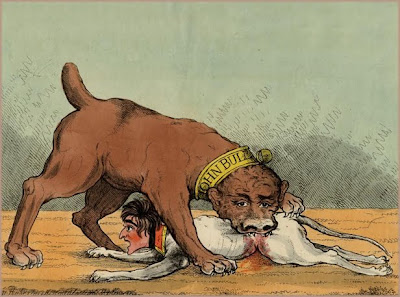 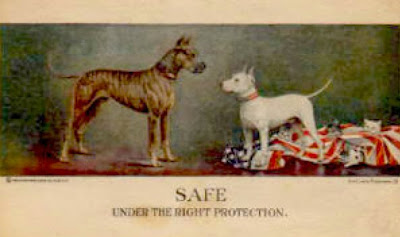 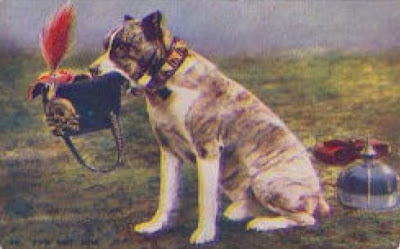 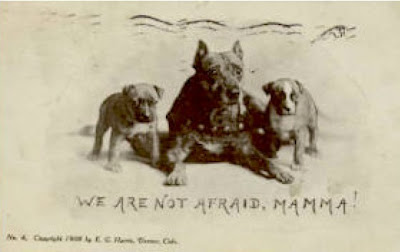 Political cartoon of Lincoln preparing to release his bulldog.

uncolored lithograph campaign poster for the 1864 presidential election. Depicted are both General McClellan and President Lincoln discussing whether or not to let a bearded Bull Dog, “Lieut. General Grant”, go after Davis and his confederate cohorts. Davis, Lee, and Beauregard are represented as whimpering dogs within the doghouse of “Richmond”. McClellan exclaims: “Uncle Abraham don’t you think you had better call the old dog off now, I’m afraid he’ll hurt those other dogs, if he catches hold of them.” Lincoln replies: “Why little Mac thats the same pack of curs, that chased you aboard of the Gunboat two years ago, they are pretty nearly used up now & I think its best to give the old bull dog full swing to go in and finish them!” The election of 1864 was conducted in the middle of the Civil War, but the Confederate States did not vote. Lincoln easily won reelection with the support of the soldiers. Very slight toning and dampstaining--adding to the character of the piece. There is a fold down the middle of the poster as well as some minor creases throughout, but they do not affect the overall quality of the image. An exceptional political artifact from the 1860s, printed by Currier and Ives!

"A Growl For Poland" a fat man holds a bulldog that is threatening a woman and another man. Link from here

bronze paper weight of bulldog pulling steak out of the ground

images showing pit bulls being bated against bears, seals, lions, and other animals. the same site features one image of bull terrier being noted as an ideal pet for a small boy. the magazine from 1912 mentions the difference of the bull terrier from an american bull terrier by saying

"The Bull terrier is now a gentlemanly and respectably owned dog wearing an immaculate white coat and a burnished silver collar; he has dealings with aristocracy and is no longer contemned for keeping bad company." — Dogs and all about them, Robert Leighton, 1910

"These pit dogs, or American bull terriers, or brindle bull terriers, or whatever name you choose, are miles away from the pure-bred English bull terrier in both looks and disposition. Their heads are square and blocky; their make up is cloddy; their shoulders are heavy, and their front legs apt to be slightly bowed. They are always more or less heavily marked with brindle, smut, or even tan on black. . . . How this dog could ever become confused the real bull terrier is a strange mystery, but with most Americans the two are jumbled up into one, and the bull terrier’s bad name has been tied to him the more securely.a" The Outing magazine, Volume 60, 1912

"There is sometimes a public prejudice against them because some people link their ideas of bull terriers with visions of “pit fighting”; but the well-bred bull terrier of today is fit to take his place beside the aristocratic Russian wolfhounds in refinement and beauty, and can hold his own with a collie or Airedale for all-round usefulness, sagacity and loyalty." - The Field illustrated, Volume 25, 1915

The White Cavalier An article on the bull terrier and how it is considered an aristocratic breed compared to the "pit bull terrier" which "had been given to the heavier variety, and the effort is now being made to make a distinct breed of this and classify it as the American bull terrier."

No one wants to pet the nanny dog! Links below from here.

EASIER SAID THAN DONE "Volunteers are to thoroughly search all Farm-Buildings, & on the line of march" - General Orders. Energetic Volunteer Officer - "Now then, you sir; why don't you search these farm buildings?"

TU QUOQUE Human - "Hmm! You'd be a nice customer to meet on the loose." Dog Answers - "After dark you would."

THE NORWICH BULLBAIT A large, angry bull, branded PM, with the head of Windham, defends itself vigorously against a hoard of small, vicious, human headed bulldogs, each with its collar inscribed Crape, Gauze, Shawls &c. Two also wear bonnets rouges and bite the bull on its hindquarters. Two pamphlets inscribed Bull baiting a rational amusement and War an Advantage to the Nation are tied to the bull’s tail, and on the right a crowd of excited electors of Norwich cheer on the dogs. In the background Fox and Tierney look on with approval and a signpost points To Norwich. The Norwich textile industry had suffered severely during the war with France, and consequently Windham, who had opposed the shortlived Peace of Amiens, and had represented Norwich since 1784, had become very unpopular. After a foolish speech in defence of bull baiting, he was heavily defeated at the election on July 5th by 83 votes. He later accepted the seat of St. Mawes from the Marquis of Buckinghamshire. BM 9879.

Butcher and his bulldog guarding a cart. Image from here.

ever think about contacting KGUN9 with information from your truth blog or even this blog? talk about myth busting.

i sent forrest a link back in february.

by the way, thanks for that link to don't bully my breed (and all of the vintage illustrations) there is a blog post in that nitwit's words. these people are beyond stupid.