Bulldog Attacks His Own Image 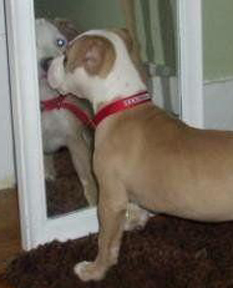 Rutherford, N. J., March 14. –
Ernest Bennings owns a bulldog that has more combativeness than brains, for it attacked its own image in a mirror.

Bennings and the dog passed a house at Rutherford from which a family was moving; various pieces of furniture were on the sidewalk, a mirror of heavy glass leaned against the wall.

The bulldog instantly sprang at its reflection only to butt his head and rebound. Picking itself up tho the dog dashed at the mirror again with such force as to smash it.

The jagged glass cut the dog's head severely, infuriated, smarting with pain, it ran behind the mirror and here and there among the furniture, searching for its shadowy adversary.

A number of persons halted to watch it. Just then a girl came along leading a pet dog. The bulldog sprang at the pet and bit it badly before Bennings could drag it away.

thanks to vintage for sending me this "stupid pit tricks"!
Posted by scurrilous amateur blogger at 9:03 AM

The Ellen DeGeneres show recently showed various clips of animals responding to their images in mirrors. As usual, the pit bull one tried to attack its reflection. No surprise there.