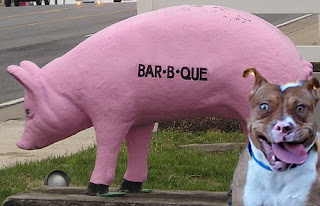 Another stupid pit bull trick - attack a talking concrete statue of a pig. 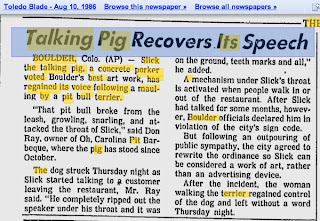 So…was this most intelligent and people pleasingly obedient pit bull thinking it was attacking a pig? or a person talking from inside a pig? or an inanimate object?

No worries, do not let this shake your confidence in nanny pit bulls. They can always distinguish small talking animals from other animals, people in costumes, and talking statues - always.


August 10, 1986
Boulder, Co. - Slick the talking pig, a concrete porker voted Boulder's best art work, has regained its voice following a mauling by a pit bull terrier.
"That pit bull broke from the leash, growling, snarling and attacked the throat of Slick," said Don Ray, owner of Oh, Caroline pit Barbeque, where the pit has stood since October.
The dog struck Thursday night as Slick started talking to a customer leaving the restaurant, Mr. Ray said.  "He completely ripped out the speaker under his throat and it was on the ground, teeth marks and all," he added.
After the incident, the woman walking the terrier regained control of the dog and left without a word Thursday night.

(Seriously, do pit bull owners get a manual to own these things that stipulates that any show of responsibility will get them kicked out of the nutter club?)
Posted by Small Survivors at 11:58 AM

This made my day. Rates right up there with the pitter attack on an airplane. As I recall pittie refused to let go and apparently hit the ground sometime after muscle fatigue set in.

Darwinism at its finest.

"Seriously, do pit bull owners get a manual to own these things that stipulates that any show of responsibility will get them kicked out of the nutter club?"

LMAO! This one certainly puts a spin into the term "Dine and Dash"!

Adding to the collection!

*Disclaimer...You Can't Make this stuff Up!

Can't you understand that this pit bull had never seen a talking cement pig before?!?

have you seen this new nutter material? you guys might need to do your own poster and go viral.

interesting that they cited animal people.

i will kick this around. thanks.

You idiots "ARE" the Nutter Club! Geez, are you people for real?

Now why in the world, would Bulldog Lovers care!!!