A General History of Quadrapeds - The Bull-Dog 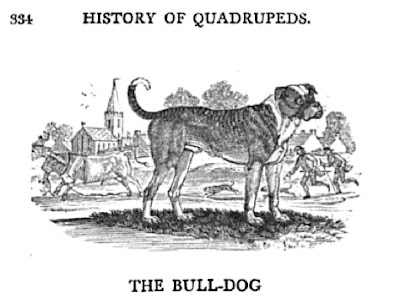 Is the fiercest of all the Dog  kind, and is probably the most courageous creature in the world. It is low in stature, but very strong and muscular.  Its nose is short; and the under jaw projects beyond the upper, which gives it a fierce and unpleasing aspect.  Its courage in attacking the Bull is well known: its fury in seizing, and it invincible obstinacy in maintaining its hold, are truly astonishing.  It always aims at the front; and generally fastens upon the lip, the tongue, the eye, or some part of the face; where it hangs, in spite of every effort of the Bull to disengage himself.
The uncommon ardour of these Dogs in fighting will be best illustrated by the following fact, related by an eye-witness; which at the same time corroborates, in some degree, that wonderful account of the Dogs of Epirus, given by Elian, and quoted by Dr Goldsmith in the history of the Dog; – Some years ago, at a bullbaiting in the North of England, when that barbarous custom was very common, a young man, confident of the courage of his Dog, laid some trifling wager, that he would, at separate times, cut off all the four feet of his Dog; and that, after every amputation, it would attack the Bull. The cruel experiment was tried, and the Dog continued to seize the Bull as eagerly as if he had been perfectly whole.
Of late years this inhuman custom of baiting the Bull has been almost entirely laid aside in the North of England; and consequently there are now few of this kind of Dogs to be seen.
As the Bull-Dog always makes his attack without barking, it is very dangerous to approach him alone, without greatest precaution. 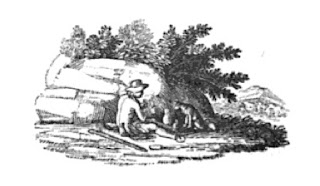 A General History of Quadrapeds - The Bull-Dog, Thomas Bewick, 1807

i think you there are some typos, might want to make sure.

have thought of making a truth blog of the the concept of america's dog? the myth appears to come support the apbt according to nutters, but i think i found some articles long ago on the library of congress that shows the "american pit" in the war posters was the bull terrier. which was also called the "american bull terrier"

and arent' the life posters of pit bulls from around the same time? if so they could be old type american bull terriers as well, since they were highly popular in dogs shows and houses around that time. if any of the pit bulls were america's dog, i think it's the boston terrier, boxer, and bull terrier. they're the three pit bulls with the safest temperaments.

when it comes to nanny dogs, the library of congress shows several articles of old type bull terriers being noted as being related to the fighting bulldog, also pit bulls, but different in temperament as they were obsessively bred away from that temperament, for the most part. and that the bull terrier is good around older children. maybe nutters confused the two breeds since they seem to be the only ones who can't identify a pit bull. if i find the articles i will link them to you.

your truth blog gets a lot of traffic. i'm surprised you don't have a post on bulldog's nature or bsl on the blog. maybe you should consider two posts. a myth busting the popularity of pit bulls, with articles linking to bsl measures and opinions to them from this blog. and another entry about their unpredictable nature. you have a lot of articles about that here. it would give this blog a lot of traffic to.

word to the wise. the truth blog should be the second link on your sidebar. move that icon underneath the facebook link. people will be more prompted to visit.

i was pretty careful to reproduce that article but i will check it. grammar and spelling are weird back then, some of it reflects olde english spelling like ardour and the capitalization of nouns like Bull and Dog aren't capitalized today. another weirdocity is the space before a semi-colon. i couldn't bring myself to reproduce that one.

re: the boston terrier, when i was reading the old OLD dog magazines fr pit bull stuff, i started looking at other breeds. the boston terrier was EXTREMELY popular 100 years ago. i had the distinct feeling that the nutters stole the boston's history and applied it to their mutants.

the bull terrier, which now sports that hideously deformed profile) was originally created in england and called the english bull terrier. originally they looked much more like pit bull terriers. i am not aware of it being called the american bull terrier but i haven't researched that dog thoroughly. do you have a link?

i would love to see those library of congress links.

thanks for the feedback, i shift things around on the sidebars but craven is the only one that i do it regularly. i sometimes go for weeks forgetting this blog, pit nutter and truth blog even exist.

thank you anonymous. you were right, there were quite a few typos. that's what i get for trying to type that in during a sneezing fit.

here are some links to articles of the bull terrier aka the american bull terrier. some of them have images. some don't.

unfortunately the articles of naming the bull terrier the american bull terrier with images. real ones. are gone. very hard to find. i cannot find them.

but you may have proof still. look at the below image.

and images of vintage bull terriers. compare to poster images.

is it interesting that the pit bull sites keep the images quite small, makes it hard to read the breed description on them. but when noted, the breed is "american bull terrier" or "american bull". when a german breed is used its' a boxer type dog, an english breed is the bulldog. compare the anatomy of the dog in the posters to game bred pit bulls from the same era that would be apbts. they don't match.

a breed standard for the bull terrier existed back them, popular breed standard color was white. popular show breed also. what better dog to complement the red and blue flag that's all white and history of fighting? but bred to be safe in more modern times? bull terriers.

wait. i thought the american pit bull terrier was popular and known as such. how can this be case when owners are trying to prove they are gentle. shouldn't it be known?

The American bull terrier which is, of course, of English origin, has been improved since its introduction into this country, and even the English breeders admit that we surpass them in this breed.

there are many more where you find this. they are hard to locate, but they exist. if you find enough, you'll have a good argument for america's dog being the bull terrier, not the american pit bull terrier, staffordshire, or close relatives.

word to the wise. save pdfs of these articles, the whole article , just in case they are removed. be wise to also use an external back up such as a discus or drive. never know.

when you make truth blog, try and do a section comparing old pure bred bull terrier images with the posters. also find large posters if possible so american bull terrier as breed is seen.

Still gripping faces after all these years.