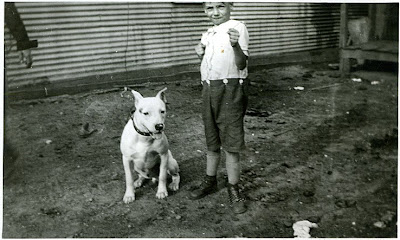 There's a snow white dog with a coal black eye.
Whose temper's as true as his courage is high.
He's the last in a scrimmage – and the last one that stops,
For when he does fight he fights till he drops.
He knows nothing of meanness and nothing of fear,
For a gentleman's heart has the White Cavalier.

He stands like a boxer, firm, active and keen,
With his punishing jaw, long, powerful and clean.
He's up on his toes, all ready to go
Like the flash of a gun to meet playmate or foe.
He's strong as a bulldog, as fast as a deer,
There's no dog with the dash of the White Cavalier.

His coat and his character both are snow white;
His look is determined; his manner is bright;
He stands at attention, all muscle and bone.
A knight fully armed for holding his own.
As mild as a maiden, as proud as a peer.
A prince among dogs is the White Cavalier.

Can we have this one for the pit bull poet laureate too? How DO you find these things?

an anonymous reader posted a link to it.

you don't need my permission to use this. no one owns this stuff, you are free to use whatever you want from this blog.

This dog sounds pretty awesome, actually. No idea how this backs up your argument that pit bulls are evil. You will use anything to make your point, even positive descriptions of these dogs.

Figures anon 8:40 doesn't see the problem. This is why pit bull owners need to be regulated - they cannot regulate themselves.