Concerning a Dog-fight by Banjo Paterson 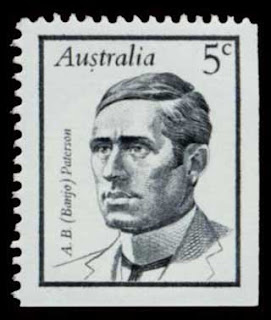 
Dog-fighting as a sport is not much in vogue now-a-days. To begin with it is illegal. Not that THAT matters much, for Sunday drinking is also illegal. But dog-fighting is one of the cruel sports which the community has decided to put down with all the force of public opinion. Nevertheless, a certain amount of it is still carried on near Sydney, and very neatly and scientifically carried on, too -- principally by gentlemen who live out Botany way and do not care for public opinion.

The grey dawn was just breaking over Botany when we got to the meeting-place. Away to the East the stars were paling in the faint flush of coming dawn, and over the sandhills came the boom of breakers. It was Sunday morning, and all the respectable, non-dog-fighting population of that odoriferous suburb were sleeping their heavy, Sunday-morning sleep. Some few people, however, were astir. In the dim light hurried pedestrians plodded along the heavy road towards the sandhills. Now and then a van, laden with ten or eleven of "the talent", and drawn by a horse that cost fifteen shillings at auction, rolled softly along in the same direction. These were dog-fighters who had got "the office", and knew exactly where the match was to take place.

The "meet" was on a main road, about half-a-mile from town; here some two hundred people had assembled, and hung up their horses and vehicles to the fence without the slightest concealment. They said the police would not interfere with them -- and they did not seem a nice crowd to interfere with.

One dog was on the ground when we arrived, having come out in a hansom cab with his trainer. He was a white bull-terrier, weighing about forty pounds, "trained to the hour", with the muscles standing out all over him. He waited in the cab, licking his trainer's face at intervals to reassure that individual of his protection and support; the rest of the time he glowered out of the cab and eyed the public scornfully. He knew as well as any human being that there was sport afoot, and looked about eagerly and wickedly to see what he could get his teeth into.

Soon a messenger came running up to know whether they meant to sit in the cab till the police came; the other dog, he said, had arrived and all was ready. The trainer and dog got out of the cab; we followed them through a fence and over a rise -- and there, about twenty yards from the main road, was a neatly-pitched enclosure like a prize-ring, a thirty-foot-square enclosure formed with stakes and ropes. About a hundred people were at the ringside, and in the far corner, in the arms of his trainer, was the other dog -- a brindle.
It was wonderful to see the two dogs when they caught sight of each other. The white dog came up to the ring straining at his leash, nearly dragging his trainer off his feet in his efforts to get at the enemy. At intervals he emitted a hoarse roar of challenge and defiance.

The brindled dog never uttered a sound. He fixed his eyes on his adversary with a look of intense hunger, of absolute yearning for combat. He never for an instant shifted his unwinking gaze. He seemed like an animal who saw the hopes of years about to be realised. With painful earnestness he watched every detail of the other dog's toilet; and while the white dog was making fierce efforts to get at him, he stood Napoleonic, grand in his courage, waiting for the fray.

All details were carefully attended to, and all rules strictly observed. People may think a dog-fight is a go-as-you-please outbreak of lawlessness, but there are rules and regulations -- simple, but effective. There were two umpires, a referee, a timekeeper, and two seconds for each dog. The stakes were said to be ten pounds a-side. After some talk, the dogs were carried to the centre of the ring by their seconds and put on the ground. Like a flash of lightning they dashed at each other, and the fight began.

Nearly everyone has seen dogs fight -- "it is their nature to", as Dr. Watts put it. But an ordinary worry between (say) a retriever and a collie, terminating as soon as one or other gets his ear bitten, gives a very faint idea of a real dog-fight. But bull-terriers are the gladiators of the canine race. Bred and trained to fight, carefully exercised and dieted for weeks beforehand, they come to the fray exulting in their strength and determined to win. Each is trained to fight for certain holds, a grip of the ear or the back of the neck being of very slight importance. The foot is a favourite hold, the throat is, of course, fashionable -- if they can get it.

The white and the brindle sparred and wrestled and gripped and threw each other, fighting grimly, and disdaining to utter a sound. Their seconds dodged round them unceasingly, giving them encouragement and advice -- "That's the style, Boxer -- fight for his foot" -- "Draw your foot back, old man," and so on. Now and again one dog got a grip of the other's foot and chewed savagely, and the spectators danced with excitement. The moment the dogs let each other go they were snatched up by their seconds and carried to their corners, and a minute's time was allowed, in which their mouths were washed out and a cloth rubbed over their bodies.

Then came the ceremony of "coming to scratch". When time was called for the second round the brindled dog was let loose in his own corner, and was required by the rules to go across the ring of his own free will and attack the other dog. If he failed to do this he would lose the fight. The white dog, meanwhile, was held in his corner waiting the attack. After the next round it was the white dog's turn to make the attack, and so on alternately. The animals need not fight a moment longer than they chose, as either dog could abandon the fight by failing to attack his enemy.

While their condition lasted they used to dash across the ring at full run; but, after a while, when the punishment got severe and their "fitness" began to fail, it became a very exciting question whether or not a dog would "come to scratch". The brindled dog's condition was not so good as the other's. He used to lie on his stomach between the rounds to rest himself, and several times it looked as if he would not cross the ring when his turn came. But as soon as time was called he would start to his feet and limp slowly across glaring steadily at his adversary; then, as he got nearer, he would quicken his pace, make a savage rush, and in a moment they would be locked in combat. So they battled on for fifty-six minutes, till the white dog (who was apparently having all the best of it), on being called to cross the ring, only went half-way across and stood there for a minute growling savagely. So he lost the fight.

No doubt it was a brutal exhibition. But it was not cruel to the animals in the same sense that pigeon-shooting or hare-hunting is cruel. The dogs are born fighters, anxious and eager to fight, desiring nothing better. Whatever limited intelligence they have is all directed to this one consuming passion. They could stop when they liked, but anyone looking on could see that they gloried in the combat. Fighting is like breath to them -- they must have it. Nature has implanted in all animals a fighting instinct for the weeding out of the physically unfit, and these dogs have an extra share of that fighting instinct.

Of course, now that militarism is going to be abolished, and the world is going to be so good and teetotal, and only fight in debating societies, these nasty savage animals will be out of date. We will not be allowed to keep anything more quarrelsome than a poodle -- and a man of the future, the New Man, whose fighting instincts have not been quite bred out of him, will, perhaps, be found at grey dawn of a Sunday morning with a crowd of other unregenerates in some backyard frantically cheering two of them to mortal combat.
Posted by scurrilous amateur blogger at 7:40 PM

yeah, seems our degenerate society has embraced the filth they thought was on the verge of extinction over a century ago.

Seems back centuries ago men enjoyed doing this as well, they were called Gladiators. Now it is Boxing or Cage Fighting, (MMA) people pay to watch. It, is not, illegal and enjoyed by millions. Difference?