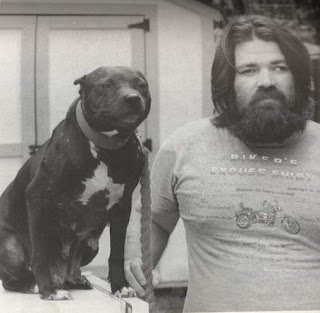 Here is a story about a champ I know
In his younger years he was ready to go
His teeth were strong his body firm and tight
With swiftness and alertness he was ready to fight
His nickname was Judo Jack because of his style
He would wrestle his opponents down
And their owners would throw in the towel
The history of Little Jack is one that's intriguing
For now he has two offspring to see this is believing
His son is a champion with a grip like steel
He made all his opponents bow down at his will
His daughter is unique in her own way
A two time winner what more can I say?
Her ability and swiftness and blinding speed
Would make all other contenders stand up and take heed
To give you a rundown is easy enough
Because Jack is a Grand Champion that's showed his stuff
Opponents he's fought had well reputations
But to get into the pit with Jack was pure annihilation
He is one of a kind who was raised with care
An EIGHT time winner he had style and a very hard bite
When he arrived at the site
All his opponents no matter what size weight or height
Little Jack was ready to give them all a fight
When the dust cleared the inevitable was done
From the cheers of the crowd you knew who had won.

Can I be the only person that can see a very strong resemblance here? The dog and the owner look exactly the same to me.

nope. not the only one.

Knowing that man personally I can guarantee noone would have ever said that to his face. I just found out he wrote books.

Knowing that man personally I can guarantee noone would have ever said that to his face. I just found out he wrote books.

i would love to read them. please post the titles.

I did, because he does look like a bulldog. But then again I am his sister. Hahaha

I did tell him he looked like his bulldogs, sisters can do that stuff! ;)

Met his nephew the other day, he works at and delivers furniture for a store in my area. He said Big Tom was a great guy and he misses his uncle since he passed away.