The Blood of a Champion - Floyd Boudreaux 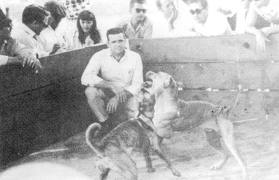 The Blood of a Champion
-Floyd Boudreaux

He will give you all he has to give,
It's the only way he likes to live,
He has earned the respect of poor men & kings,
He has fought in the open, in the pits and in the ring, He has fought the wolves, the bull and the bear, For his own life he has not a care,

We don't force him to fight, he can quit at anytime, But its not a bulldog that stands the line, When we speak of bulldogs the words that fit, are those like courage, stamina and grit,

In the pit he is powerful, fierce and wild, But at home will sleep with the smallest of child, He knows not the meaning of the word quit, he likes it on the chain, but longs for the pit,

Dogfighters as disgusting as they are, know the true nature of pretty pittie.

You are sick and twisted and should be burned in the brimstone of hell. I would gladly go and watch a pit in the ring the wants your blood.

Packhorse, Floyd Boudreaux was not a dog fighter.
http://theadvocate.com/home/827776-79/dog-deaths-lawsuit-settled.html

Packhorse, Floyd Boudreaux was not a dog fighter. Google him. Phttp://theadvocate.com/home/827776-79/dog-deaths-lawsuit-settled.html

the game will live forever. those who know, know.
long live the gmaedog

what dogmen do is preserve the blood of the original breed standard. it is the duty of all domestic animals to earn their worth by serving man. what floyd has accomplished will never be repeated. long live the king

lol rivka333. you are one hell of a gullible moron.