America's Dog, then and now.

The more things change, the more they stay the same.

Dead–We regret to state that the apprehensions expressed by the physicians on Wednesday evening, have proved true, and Mr. John A. Dubernar, who was so severely bitten by the dog of Mr. Rozell, on Saturday last, now lies with the dead. He expired at his residence, in High street, yesterday morning. Mr. D. was a native of France, but has been a resident of Baltimore about fifty years. He was much esteemed by those who knew him. His death is a melancholy comment upon the impolicy, we might almost say, the criminality of keeping dogs so ferocious in their character as this one was, in the the yards of private dwellings. The bull terrier, and this dog was one of that species, is perhaps the very worst description of dog,   with which we are beset in our community. They are always fierce, and, it is a rare circumstance, that even their masters have control over them–when they once take hold, death has been frequently found necessary to make them loosen their grasp. Such animals should never be kept in the yards of private swellings. We have received a note from Mr. Roszell, in which he states that injustice has been done to him in our previous account of the matter. We may have, and according to his statement, did slightly, err in reference to the the mode and cause of the attack made by the dog upon the colored woman; but in the main, it was correct. We did not doubt, and do not now doubt, that every thing was done by the family of Mr. R. to prevent the catastrophe, which has ended in so melancholy a manner. But the very fact of the inability of those who lived in the house to restrain him, is evidence conclusive of his ferocious character. We would not do injustice to Mr. R.; we have no such motive–and we feel assured that no one in this community regrets more sincerely than he does, this sad affair.–The lesson, we trust, will be a profitable one to others.

Nearly 170 years later and we have still not turned a profit on the lesson Mr. John A. Dubernar tragically learned. 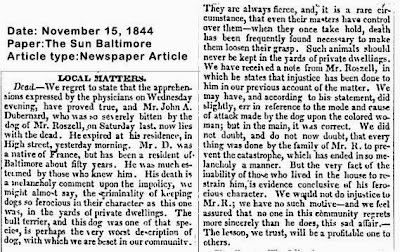 For the most complete record of american pit bulldog fatalities, see http://www.fatalpitbullattacks.com/.