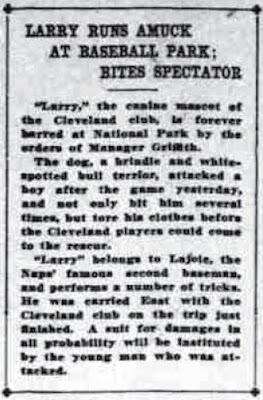 LARRY RUNS AMUCK AT BASEBALL PARK; BITES SPECTATOR
"Larry" the canine mascot of the Cleveland club, is forever barred at National Park by the oders of Manager Griffith.The dog, a brindle and white spotted bull terrier, attacked a boy after the game yesterday, and not only bit him several times, but tore his clothes before the Cleveland players could come to the rescue."Larry" belongs to Lajoie, the Naps' famous second baseman, and performs a number of tricks. He was carried East with the Cleveland club on the trip just finished. A suit for damages in all probability will be instituted by the young man who was attacked.


Larry belonged to baseball slugger Napoleon Lajole who pawned the little frankenmauler off onto team mate Jack Graney. "Take him. The dog is yours." Lajoie sounds just a little too eager to unload America's Dog, wouldn't you say?

Children author turned propagandist Barbara Gregorich has written a book for children about Larry the mascot. My co-blogger alerted me to the facebook page promoting the book. I left a polite, somewhat sarcastic comment asking if this attack was included in the book. I included the link. She replied, I replied, she replied, I replied and then she deleted the entire conversation which I preserved and can be viewed here. It is also important to note that she has blocked me from leaving anymore comments.

History is full of accounts of pitbulls being abnormal and aggressive against humans.
Nowhere are there any real historical articles on the dogs being Nanny dogs. These dogs were never nanny dogs ...pitbull advocate can make up lies but you don't have to swallow the bully lovers Bullsh*t.

Great graphics and GREAT research! How in the heck can this author make a book fpr kids popularizing a dog that Mualed another child? That is twisted, evil, and downright deceptive. I am so glad you are as smart as you are Dawn James.
This really shows how they deliberately rewrite history and deny maulings..THEY LIE.

What follow up was necessary? it says the dog was banned.

Oh, since Barbara Gregorich doesn't see the significance, maybe her publisher will!