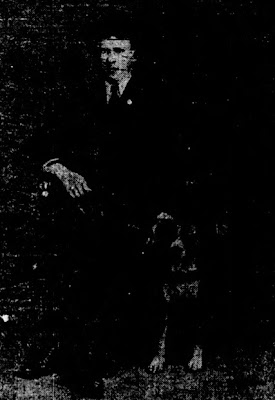 Paddy was involved in what is described by pit fighting aficionados as the "most exciting episode in the history of the St Louis dog pit".

Bob holds a grudge
Paddy was matched against a vicious man biter named Bob who could only be handled by his owner. Bob and the referee shared an interesting and violent past. And apparently Bob was not as forgiving as those wiggle butts who have been starved or set on fire. When Bob caught sight of the man who beat him almost 2 years earlier, he lost sight of his purpose and launched an attack on the referee. The referee climbed to safety and raging Bob redirected on the crowd of spectators. Mayhem ensued.

Paddy to the rescue!
Paddy's owner set his dog on Bob which stopped him from charging the spectators.

I wonder if this demented man-biter was culled and if not, why not?

"Man biters were culled" is oft recited despite many citations of dog fighters using manbiters in the Pit and the "Fountainhead's" dog killing a child.

I'm sure neither pit bull was culled. The bull terrier because she proved to be a solid fighter against Bob. And Bob most likely because he had the ultimate will to fight, even if it was often the wrong target.

Meet Philadelphia Prize fighter Jimmie Lynch whose Pit Fighting bulldogs mauled a boy in Philadelphia back in 1892...The dog was apparently not culled because it was "scheduled for a match in 2 weeks".

One of C.C Obrien's prize fighting bulldogs kills a boy in Philadelphia back in 1894....

Bert Colby Leadbetter killed at the Colby Pit Breeding plantation back in 1909...John P.Colby known as the "Fountainhead of the American Pit Bull Terrier" is perhaps the most famous breeder of all time...His dog "Colby's Pinscher" had over 20 documented wins, with no dog lasting more than 30 minutes with him. Colby sold over 500 fighting animals.

February 8, 1910: First African American Heavy Weight Boxing Champion Jack Johnson is incarcerated in Detroit after his "Prize Bulldog" nearly chews the arm off a Detroit citizen. He vows that he will spend all he is worth to save the dog's life.

Johnson is occasionally cited by the Pit Breeding lobby as a "Famous American who owned Pit Bulls".

Henry Balzar's "Prize fighting Bulldog" named "Terror" latches onto his face like one of the larvae in the "Alien" series movies . The animal has to be shot to release his face...

1891: After William Truss is seriously mauled by dog fighter William Faversham's 30 Pit Breeding Operation, he is ordered out of Atlantic Highlands NJ within 24 hours by the Mayor.


In 1917, Faversham would be honored as judge for Bull Terriers at the Westminster Dog Show!

David Jefferies is severely mauled by by James Hutton's reitired fighting Bulldog in Philadelphia back in 1884..."she had been famous for her perfomances in the Pit, but recently has only been used for breeding"..."Hutton himself seemed afraid of her"