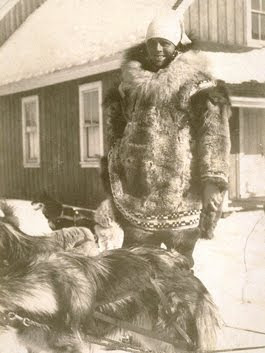 The following is an excerpt from Jack London's White Fang.

There was no escaping that grip. It was like Fate itself, and as inexorable. Slowly it shifted up along the jugular. All that saved White Fang from death was the loose skin of his neck and the thick fur that covered it. This served to form a large roll in Cherokee's mouth, the fur of which well-nigh defied his teeth. But bit by bit, whenever the chance offered, he was getting more of the loose skin and fur in his mouth. The result was that he was slowly throttling White Fang. The latter's breath was drawn with greater and greater difficulty as the moments went by.

It began to look as though the battle were over. The backers of Cherokee waxed jubilant and offered ridiculous odds. White Fang's backers were correspondingly depressed, and refused bets of ten to one and twenty to one, though one man was rash enough to close a wager of fifty to one. This man was Beauty Smith. He took a step into the ring and pointed his finger at White Fang. Then he began to laugh derisively and scornfully. This produced the desired effect. White Fang went wild with rage. He called up his reserves of strength and gained his feet. As he struggled around the ring, the fifty pounds of his foe ever dragging on his throat, his anger passed on into panic. The basic life of him dominated him again, and his intelligence fled before the will of his flesh to live. Round and round and back again, stumbling and falling and rising, even uprearing at times on his hind-legs and lifting his foe clear of the earth, he struggled vainly to shake off the clinging death.

At last he fell, toppling backward, exhausted; and the bulldog promptly shifted his grip, getting in closer, mangling more and more of the fur-folded flesh, throttling White Fang more severely than ever. Shouts of applause went up for the victor, and there were many cries of "Cherokee!" "Cherokee!" To this Cherokee responded by vigorous wagging of the stump of his tail. But the clamor of approval did not distract him. There was no sympathetic relation between his tail and his massive jaws. The one might wag, but the others held their terrible grip on White Fang's throat.

1909 RUN OFF WALK BY ONE DOG TO BE BESEET BY ANOTHER
Bulldogs that the author labels as vicious are unwanted in Los Angeles according to him by the obvious danger they represent.

1913 BULLDOGS TEAR MEAN TO PIECES DOGS ORDERED SHOT
Three vicious bulldogs owned by Mrs. A. Fish, blue ribbon winners at several dog shows, attacked and terribly mangled William Bowers, 3345 South Park avenue, when he entered a grocery at 4518 Cottage Grove avenue this morning. Bowers abdomen was horribly torn, his face lacerated and one hand was nearly chewed off. He was taken to a hospital in a critical condition. The dogs were taken to the pound and ordered shot.

1914 HAD AN AWNSER
Olive and Gerald, while out walking, met a vicious bulldog, and Gerald's conduct in the next few moments left much to be desired. When they had safely passed, Olive turned to Gerald and said, reproachfully: "Why Gerald! And you said you would face death for me." "I know I did," answered Gerald, "and I meant it. But the bulldog wasn't dead."

1919 PLAY
A play the depicts the plight of colored people depicts a scene in which a man is thrown into a pit with a bulldog that tears out his eyes and tongue while scalping him. The owner o f the dog and crowd danced in delight at this gruesome scene.