Fans of america's dog love to proclaim that their wiggle butt never met a stranger, would only lick you to death, make horrible watch/guard dogs and would help a burglar pick them clean. These comments come on the heels of an attack as they try to convince us that REAL american pit bull terriers are people friendly dogs due to the dogmen culling all of the man biters.

But the historical evidence proves contrary.

As a watchdog he is unexcelled. This book could be written five times on this one subject, in regard to the American Pit Bull Terrier as a watchdog. Only recently the writer sold a dog to a party who had trouble with thieves stealing his chickens and fuel. This party didn't care particularly about the bloodlines or the breed of the dog, just so he was a watchdog that would put a stop to thieves that were carrying chickens and fuel away. The pound had been exhausted of so called watch dogs, but to no avail. Since purchasing this dog, there have been no chickens or fuel stolen. However, this dog is kind and gentle. Not bent on biting anyone who comes along, but has the instinct to know right from wrong in guarding his master's property.

The Colby name is one of the oldest and most trusted when it comes to America's dogs. You can read more about Colby dogs and his man killer. 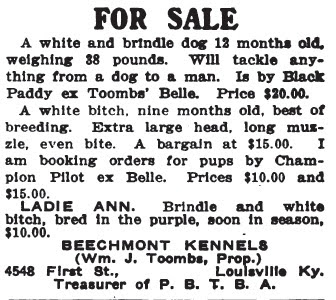 The Dog Fancier magazine 1911
That's right. The treasurer of the pit bull terrier breeder association is trying to unload a maneater.


I will add to this
Posted by scurrilous amateur blogger at 12:01 AM