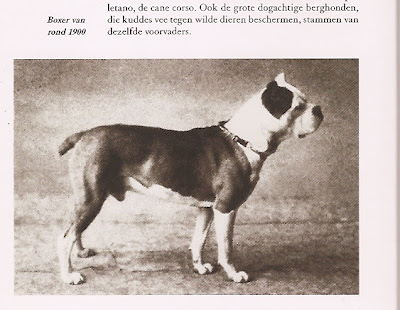 The Boxer is yet another variation on the original Bulldog, but this one was developed in Germany. Early Boxers were almost indistinguishable from the modern-day APBTs, and their temperament too, is similar. The history of the Boxer in Germany is almost a mirror of the Pit Bull in England. First developed as a "gripping" dog for boar hunting. It was later used for a time as a dog fighter. Unfortunately for the Boxer, its flashy appearance and proud nature made it an ideal show dog, and soon a "standard of perfection" which called for a non-functional muzzle and jaw structure was developed. Rather quickly, the Boxer became just another show version of the Bulldog type. Without doubt he is closely related to the Pit Bull, and comes from the same ancestors, simply developed in another country along slightly different lines.