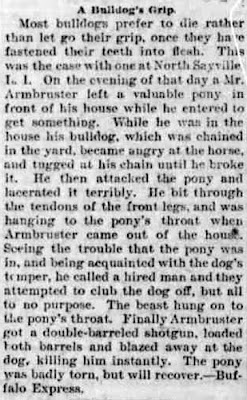 A vicious bulldog is a dangerous animal. here is an account of a dog attack on a horse, taken from a San Francisco paper:

Charlie a large bulldog sprang at the nose of a horse attached to a Renown bakery wagon standing at Eddy street, near Market, yesterday morning and, fastening his teeth in the nostrils of the terrified animal, slung for several minutes. Superintendent A J Kopf and Special Officer C F Kidder of the Pacific Humane society finally succeeded in making the dog release the hold. Dr Edward Creely of 1818 Market street attended the horse, and said that it will probably have to be shot.

George O'Leary of 20th street and Potrero avenue, a dog trainer, held the animal in a leash at the time, and was arrested for cruelty to animals. The dog was also locked up in the cellar of the City Prison, and was subsequently sent to the pound.

According to the police Joe Pine of 22nd and Hampshire streets, is the owner of the dog and the animal is said to be on of the most vicious fighters on the coast.

The driver of the bakery wagon, whose name was not ascertained by the police, was so startled when the horse reared that he fell back and smashed a score of pies. A big crowd gathered while the dog swung from the horse's neck. The horse kicked with it's forefeet and neighed, a bartender cam out with a siphon bottle and squirted nearly a quart of seltzer down the dog's throat, another man held a lighted cigar to the animal's mouth. Nothing would induce the brute to let go his murderous hold until Kopf and Kidder hammered him with their clubs.

The Ogden city administration acted wisely when it passed an ordinance requiring bulldogs to be muzzled. The animals are instinctively a fighting machine and the most vicious of dogs and will set upon man or beast and persist in their mad fury until weakened or killed by clubbing. Running at large without muzzles, they are more dangerous than hungry wolves on a prairie.
Charging pit bull owners with animal cruelty when they attack other animals? What a novel idea! 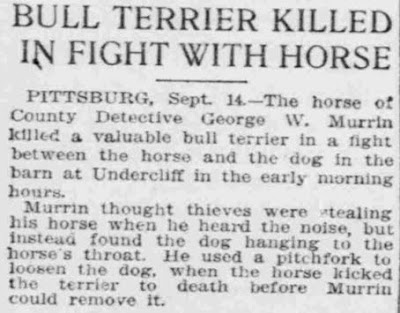 STICK TO YOUR AIM, THE MONGREL'S HOLD WILL SLIPBUT ONLY CROW BARS LOOSE THE BULLDOG'S GRIP. 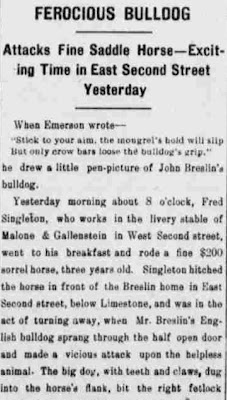 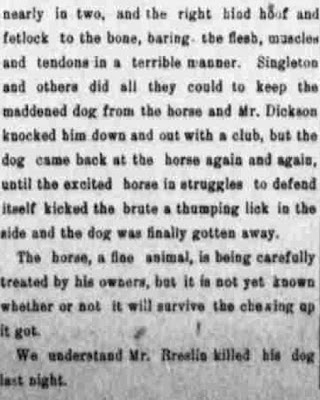 Singleton and others did all they could to keep the maddened dog from the horse and Mr Dickson knocked him down and out with a club, bu the dog came back again and again, until the excited horse in struggles to defend itself kicked the brute a thumping lick in the side and the dog was finally gotten away.