Before Denver, before Miami, before Ohio, there was Utah. 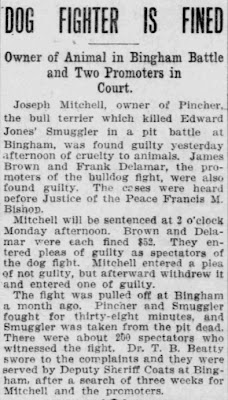 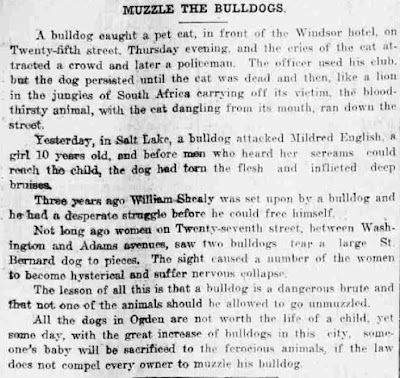 The lesson of all this is that a bulldog is a dangerous brute and that not one of the animals should allowed to go unmuzzled.


Why so much attention given to the Beehive State?

Could it be a member of the PBTB Assoc lived in Ogden?

Could it be that pit breeder F.W. Matthews' curs made their way from the pit to the pram? Could it be they did not integrate well outside the of the box. 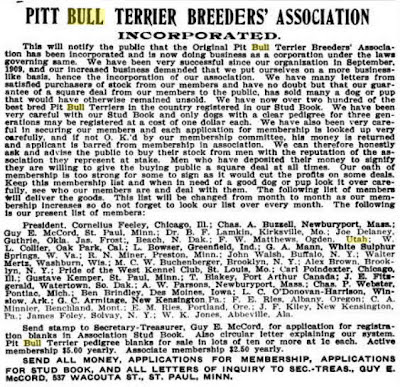 (notice the spelling of pit with two TTs)

Dawn! The first mention of a dog being called a nursemaid and it's not a pit bull! But it is a fictional account of a doing being noted as some form of nursemaid in occupation. The article continues to state that the play will be held at the Grand Attire Dec. 2nd & 3rd.

The article doesn't mention what breed of dog would be playing as a fictional nursemaid. So on all accounts, this isn't really proof of any breed being known as a nursemaid dog more than it is as proof of the use of the term being only in fiction. Regardless of the supposed breeds.

Mary, who is a charming undergraduate in a Lynhaven Seminary, is notified that she has inherited her uncle's estate on one condition that she does not marry until her twenty-first birthday. The will also appoints Professor Pennanink, the principle of the seminary, her sole guardian.

Matters take an eventful twist when Proffessor Pennanink plans to marry his son, Waldo, to Mary. But the call of romance has already come into Mary's life. She is secretly married to the athletic instructor of the seminary, their baby being cared for by an old Indian squaw, Minnehaha who was a has a hut in the woods nearby. Everything goes serenely until the day Waldo follows them to Minnehaha's hut and, witnessing the family reunion, is greatly mystified as to the identity of the child.

Jack and Mary, however, believing they are discovered, hide the baby in the school attic, where it is cared for during Mary's absence by Teddy an almost human dog, who acts as nursemaid.

Ogden should never have given up that BSL

I found some more information on the play. Mentions very little if anything about the dog who is to play the role of nursemaid. The page this starts on in the google link is 114 of the book and it has an image of a woman with flowing curly hair.

IMDb information on the film.

TCM information on the film.