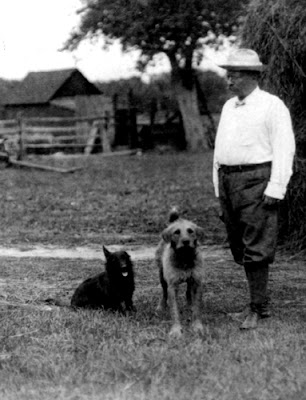 Roosevelt with two of his many, many dogs. Neither of these dogs are the famous White House Bandog. There is probably not a photo of Pete given the nature of his job: to keep reporters away and the fact that Pete seemed to be in a perpetual state of time out for his bad behavior before his ultimate banishment.


Pete's breed has been listed as boston bull terrier, bull terrier and bulldog. Given the confusion around fighting dog breeds and the flexible usage of these terms over the years, it is impossible to say with absolute certainty what breed Pete was without a photo. Boston Bulldog seems the most likely choice given the mention of the stubby tail in the Telegraph-Herald but pit dogs on occasion had docked tails. One thing is for certain, Pete was a gripping dog and he lived up to the reputation. It appears that Pete had a taste of at least 5 different people (french ambassador, government clerk, 2 police officers, a utility worker) and menaced many more. 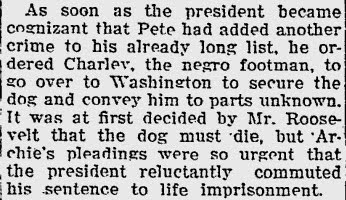 Pete also had a chance encounter with a stray bull terrier that brought humiliation on the president. Pete launched an attack on a stray bull terrier who grabbed a hold of Pete and "shook him like a rat". Pete was rescued by the white house policemen, once freed from the bulldog's grip, he ran for the white house yelping with tail tucked. While Roosevelt was humiliated, the interior department had a party.

According to a veterinarian and expert on presidential pets, Dr Ronnie G. Elmore, "Pete was a Boston bull terrier owned by Teddy Roosevelt family. Pete often bit visitors to the White House and once he even tore the pants off the French ambassador, Jules Jusserand. It was quite a scandal back in the early 1900s."

Mark Derr identifies Pete in A DOG'S HISTORY OF AMERICA (p 244) as "a bulldog or a bull terrier-who terrorized the White House between 1905 and 1908".


And according to Stanley Coren in THE PAWPRINTS OF HISTORY (p 279) Pete is identified as a bull terrier. Coren described the president's attitude towards Pete's increasing aggression, "Roosevelt waved the incidents off as "the nature of the breed".

Roosevelt loved dogs and had many over the years. There are many photos of Roosevelt's dogs but I find none of the famous Pete. It could be that Pete was always squirreled away for the safety of others.

famous pit nutters
Posted by scurrilous amateur blogger at 9:00 AM

In truth, Pete could have been any of those breeds of dogs. Especially since all three were still used for fighting at that time.

The Boston Terrier did not become a recognized breed of dog until the 20's if I'm not mistaken, so the urge to attack could have been high in Pete if he were that breed. Until there are pictures of a pit type dog that we can judge from, this chould be marked off as another desperate attempt to overexxagerate the history of the american pit bull terrier.

Let's be honest. When pit bull adcvocates apply these breed "facts" they only apply it to the American pit bull. Nevermind the other pit bull type dogs such as the Boston, Bull Terrier, and the ever debatable Staffordshire. Despite the fact that most famous pit bulls in history weren't American pit bull terriers!

IT really is hilarious that nutters have been saying forever that Teddy Roosevelt owned a pit bull and not one of them actually checked the story to see that it wreaked havoc and had to be BANNED.

if ya can't argue against facts, insult them.

I love this article...It reminds me of my Boston Bull Terrier "Barney" who I swear could have been Pete's brother....never a dull moment at our house, but he is the smartest dog I have ever had the honor of owning, loyal and protective of me til he passed away this past year.

Not sure. maybe the archives are now only available if you buy a subscription.