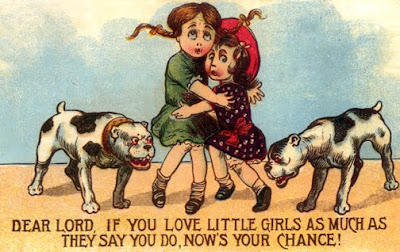 Girls, the split skirt is dangerous.

It may not be hard on the eyes of men, and may facilitate walking, but it is a mighty poor protection when a bulldog attacks you.

Mike Romain owns, or did own, a bulldog. It is a perfectly moral animal, but it couldn't stand the sight of Anna McMannagan's split skirt.

Miss McMannagan visited the Romain home wearing one of those new fangled garments. Romain's bulldog grabbed her by what the skirt failed to conceal and closed his jaws. As a result Anna was painfully hurt, and the dog is in the pound, awaiting death. Judge Sullivan administered the sentence, in spite of an eloquent plea by Romain.

"It was one of those new skirts that did it," wailed the owner of the dog. "Anna McMannagan comes to our house wearing one with a ventilator in the side. My dog ain't used to anything like that, so he makes a snap at Anna's–well, he snapped where there ought to have been some dress goods. But there wasn't any material–"

"Whaddye mean, there wasn't any material?" interrupted the judge after looking at the Anna.
"There wasn't any dress material, your honor," explained Romain. "So the dog just naturally bit her. Ordinarily he's gentle, just like a calf, judge."

But Miss McMannagan isn't going to wear her split skirt when there are dogs around.

FAIL: real world temperament test.
I guess Mike should have used some of gripper's favorite treats to familiarize him with split skirts. 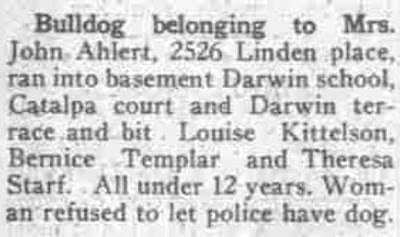 Before it was the weather or training that agitated pit bulls, it was the cucumber and split skirt.

I think the bulldog here is used as a moral enforcer to women to keep them in their heavily skirted place.

I looked up just what a split skirt in 1913 would look like:
http://socialdance.stanford.edu/vintage/Ragtime_attire.htm


And I found this article from the same year:
http://antiqueclippings.blogspot.com/2007/04/girls-dainty-figure-in-split-skirt.html

Damn women exposing their ankles, even the dumbest beast knows that is morally wrong!

great links snack. obviously the bulldog was justified in biting this floozy. damn i should apologize.

and anonymous, everyone knows that cucumbers are just plain evil.

So I'm watching pit boss on animal planet and some of the episodes focus on pit bulls in Denver and how they are taken away from their home. My first question is this - These people know  that pit dogs are banned in Denver. So  doesn't that mean that people are knowingly getting pit bulls even though they know they would be breaking the law, and sending the pit bull to an automatic death sentence?

If they loved the dogs why would they put the dogs through that? Why would Shorti not educate these people that they are putting the dog at a serious position?

Oh - that's right... In order to show how the pit bull is hurt by BSL that would mean you'd have to put pits in situations that would hurt the dog. Talk about bad ownership!

This would be an interesting g dig for you Dawn

Pit Boss never mentions there have been 20 California residents killed by Pit Bulls since 2005 and how LA County euthanizes 10,000 pitties annually.

Not sure why it drives them nuts when a city jumps off the Pit Bull crazy train...When the breeding market closes, dog fighting and rescue operations are closed for business, my guess anyway...These people are out of business if Pit breeders produce a safer dog in responsible numbers.

It always infuriates me when people talk about the pit bulls torn from their families and killed in ban areas.

They try to blame the ban, but it is the owners, just as you said, who feel their fetishistic desire to own pit bulls is much more important that the life of the pit bull. It is not as if they couldn't get fucking dog. They can get other kinds of horrifically dangerous breeds too. They can even get american bulldogs in denver, for crying out loud. But they have a fetish for pit bulls.

These people do not love animals. They get off on fulfilling their fetishistic needs. It is SICK.

If they cared so much that pit bulls were being torn from their families then they would not get the pit bulls when they know that it''s illegal to own one in Denver!

If they want a pit bull so much they could simply move out of the county or out of state. Colorodo is a pretty cheap place to live, and Denver is one of the most horrible places to be. It would make more sense to get out for your own welfare and the pit bull's if you so chooes to own one.

When I saw that episode on pit boss it pissed me off. Not only did the woman put the dog at a disadvantage, but the dog was clearly upself when she was permanatly leaving! And Rossi doesn't take the time to educate her on the fact that she put the dog at a disadvantage, because she clearly did with her selfish urge to own one, but he blames the law makers for something that the owner of the dog broke for no reason!

Those types of owners don't care about the dog, only their own ego.

It's funny how the Pit Community chooses its heros and battles. Shorti was convicted of attempted murder and lives in a state where there have been 41 Pit Bull DBRFs.

Rallying the pro-mauling forces outside a city that has reduced pit attacks to single digits and has a Pit Bull A/C throughput of less than 200 a year....

Don't most of the pit bull celebrities have some kind of illegal action or crime sheet?

Millan was an illegal imigrant for most of his life. Shorti was convicted of attempted murder, Tia Torres is a financial fraud who married  a man was already convicted and who's supposedly in kahoots with the the aryian brotherhood.

I thought that the pit bull community wanted to show that normal people also own these dogs and to use normal people to promote them.

The fact that they promote pit bulls by showing them through some of the scummiest people around seems to be a serious flaw in their propaganda when you take a brief moment to really study it from that angle.