Hmmm... I thought pit bulls were the CURRENT bugaboo breed?

Here it is, 1911 and a BREED SPECIFIC LAW is being proposed - not against Bloodhounds or Newfoundlands or St Bernards or German Shepherds or Dobermans or Rottweilers but BULLDOGS, ie pit bulls. 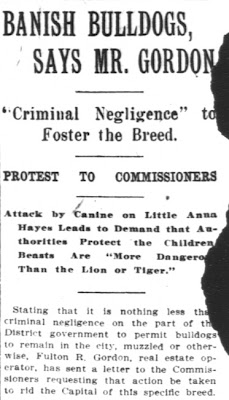 Gentlemen: I observe by The Washington Herald that the nine-year-old daughter of Thomas Hayes, of 2200 H street northwest, was seriously injured yesterday by a bulldog owned by Dr Norval Herbert, of 2145 H street northwest. It seems to me that this is becoming such a frequent occurrence that out government should take immediate steps to rid the city of this particular breed of dog. If you will remember, it was only a few months ago that a child was almost torn to pieces by one of these dogs on Columbia road, and in that case it was the pet dog of the household.
About two years ago I was attacked by one of these beasts, and since that time I have taken note that it is not an uncommon occurrence for one of these ferocious animals to turn on children without the slightest warning and literally tear them to pieces, and in every case would have killed the person attacked had some person not come to their rescue, as did the boy in saving the life of the little girl yesterday.
I might add that the muzzle law does not protect children from the attacks of bulldogs, for the reason that they always make the attack on their master's own family, or within the home or yard where they are not require to be muzzled.
It seems to me that the bulldog is more dangerous than the lion or tiger, for the reason that we protect ourselves against such animals, but there is no protection for the helpless child against this treacherous beast.
I trust that this object lesson will make the same impression upon you, gentlemen, as the killing of the little girl did the other day with the motorcycle carrying two passengers, which you promptly investigated and passed a rule prohibiting. I hope now that you will take the same fearless steps and banish all bulldogs from the District of Columbia.
I again wish to state that it seems to me criminal negligence on the part of our government to allow these dogs to remain in our district another day.
Fulton R. Gordon
September 29, 1911

Pit Peddling is about breeding dogs for bloodsport money...The Pit Lobby will say anything and do anything to preserve it. The fairy tales they had to make up about the breed prove it.

You could change the date of the letter to 2011 and update with the APBT moniker and it would be entirely accurate and relevant.

Almost 260 Americans have been killed since 1980 with thousands of additional mauling victims..and yet the big Pit Bull propaganda Machine treats them like speed bumps.

Hard to believe people are getting rich off perpetuating this man made problem.

This is the perfect response to "they were once beloved as america's dog!"

i guess media hype and fear mongering is nothing new to the pit bull ;-)

I noticed something. The majority of people who are supporting pit bulls back in this day are people who have something to gain from the exploitation of pit bulls. Charles Werner is a fine example of this. He bred fighting pit bulls but when the law was cracking down on his breed of choice he decide to paint them in a different light in order to preserve the breed long term.

They're no different from the pit bull "advocates" of today. Who claim to "love" the breed but then dismantle laws that actually protect pit bulls. Not only that but they actually benefit from the suffering of pit bulls. As evidenced by the Vick dogs and many pit bulls who are bred then dumped. why should the welfare of those dogs and the people who buy them matter when you're selling a pup at around a grand?

Each year around 1 million pit bulls are killed in shelters. Most of those pit bulls are young suggesting that they were bought then dumped when the dog become inconvenient or violent. Just pretend that the puppies sell for $500, that's a $500,000,000 dollar industry based on the exploitation of the dogs. The more dogs that die, the more homes are open. The breeders at the very least don't care about welfare, temperament of safety of the dogs or people. And the higher advocates like Dona, Ledy, and other people at Bad Rap and Best Friends have brainwashed the people who do have good intentions into believing that removing responsibility from the equation is what's going to solve the pit bull problem. Well it's not.... It's clear why there's a reason that those agencies aren't for mandatory spay and neuter, owner or breeder control. It would take away their cash cow.

Don't believe me? Google pit bull breeder (not the bully kind although they sale for thousands as well) or go to forums that sell purebred APBT pit bulls and you will see how much they cost and how many litters they pop out... it's sad.

the pit bull could be saved if people actually knew what they were supporting and researched who or what they should and shouldn't support.

I don't understand why so few people fail to realize this...